Consequences of Invasions and Vandalism in Brasilia 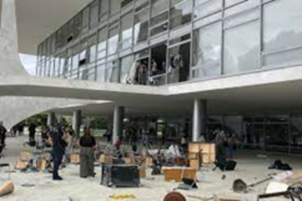 On January 8 the Presidential Palace (Palácio do Planalto), Federal Supreme Court and the National Congress were invaded and vandalized in attacks that received worldwide attention, and were compared to the invasion of the US Capitol on January 6, 2021. The investigation over the instigators and financiers of the acts continues and more than 1,200 prisoners are in the custody of the Federal Police.

Nominations in the Ministries and Priorities

Simone Tebet, minister of the recreated Ministry of Planning, announced her team with names coming mostly from career politicians in the House of Representatives. Tebet presents the creation of the Secretariat for Monitoring and Evaluation of Public Policies, a development that will allow the ministry to carry out work in partnership with the Federal Accounting Court (TCU), currently responsible for conducting assessments of the quality of public spending and the implementation and execution of public policies. Sérgio Fripo will be the secretary. He is the founding member of the National Institute of Science and Technology in Education, Economic Development and Social Insertion and researcher and associate editor of the Journal of Business Economics and Statistics.

Marina Silva, Minister of Environment and Climate Change, announced the federal representative for São Paulo, Rodrigo Agostinho (PSB), as the new president of the Brazilian Institute of the Environment and Renewable Natural Resources (IBAMA). He is an environmentalist, and was the president of the Environment Commission of the House of Representatives and coordinator of the Environmentalist Parliamentary Caucus in the National Congress. Another highlight of the Ministry is the resumption of the Amazon Fund, responsible for financing socio-environmental projects in the Amazon. At Davos, Marina intends to resume strategic partnerships to seek more resources for the fund. Fernando Haddad, Finance Minister, announced Bernard Appy as the Special Secretariat for Tax Reform, a priority of the administration. Appy was the director of the Fiscal Citizenship Center and a researcher in the tax area, being one of the authors of Amendment Bill 45, which proposes a single Value Added Tax (VAT). In the last legislature, the proposal was debated and approved by a special commission and awaits a vote on the floor.

Brazil at the World Economic Forum

The World Economic Forum opened this Monday, January 16, in Davos, Switzerland. This year's theme is “Cooperation in a Fragmented World.” The Brazilian government is represented by the Minister of Finance, Fernando Haddad, and by the Minister of the Environment and Climate Change, Marina Silva. President Lula did not attend the meeting because he will make his first international visits to Argentina and Uruguay.

Haddad participated in two panels: one on Brazil and another one on economic policy leadership and the global role of Latin America. Marina Silva participated in the first public debate of this edition: “In Harmony with Nature.” On Thursday, January 19, she will participate in the forum, “The Amazon at a Crossroads.” Both will meet with global leaders such as the president of the Inter-American Development Bank (IDB), Ilan Goldfajn.

Both ministers emphasize that the economy and sustainability will go hand in hand in this new administration and that the Brazilian democracy is solid, despite the events that took place on January 8. In fact, the presence of the two ministers representing Brazil is part of this narrative that aims to repair Brazil's foreign image due to the deforestation rates in recent years and the lack of commitment to preserving the environment.

The official inflation index (IPCA) of 2022, 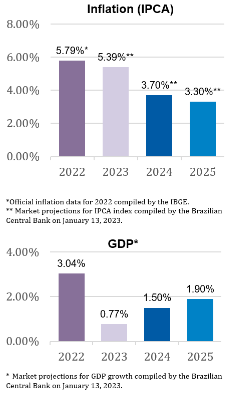 measured by the IBGE, closed the year at 5.79%, above the maximum target of 5%. The index is off target for the second consecutive year. The financial market expectation for 2023, according to Focus Report (consolidated by the Brazilian Central Bank), is inflation of 5.39%. If expectations are confirmed, it will be the third year in a row that inflation is above the target ceiling, which for this year was established at 4.75%, reinforcing the alerts for the administration about the monetary policy. Focus Report also points out that inflation index expectations for 2024 and 2025 are 3.7% and 3.3%, respectively.

The GDP projected for 2022, carried out by the Brazilian Central Bank market expectation report (Focus Report), closed the year at 3.04%. The official index for the Brazilian GDP in 2022, calculated by the IBGE, is yet to be released. The growth expectation for 2023, also projected by the Focus Report, is much more modest, at 0.77%. For 2024 and 2025, the current expectation is for growth of 1.5% and 1.9%, respectively.

The new value of the minimum wage proposed by the current president, through the Transition Amendment, would be BRL1,320 (~USD258,00) per month. However, a provisional measure still needs to be signed for it to take effect. The Minister of Finance, Fernando Haddad, who was also involved in the discussions, pointed out that the budget of BRL6.8 billion destined to increase the minimum wage has already been consumed by the acceleration of the queue at the National Institute of Social Security (INSS), thus, the implementation of the new value is still under discussion. However, Labor and Employment Minister, Luiz Marinho, still intends to open a negotiation table with unions – which are already pressuring the government – to evaluate the issue. It is worth noting that the former-president Jair Bolsonaro (PL) signed a Provisional Measure at the end of his administration that increased the monthly minimum wage to BRL1,212 starting January 1, 2023.

Finance Minister Fernando Haddad announced a package of measures to try to reduce the BRL231 billion gap in public accounts estimated for 2023. He presented a list of proposals, including new rules about how companies can generate tax credits that could increase federal revenues, and a new tax debt renegotiation program for individuals and companies. In short, the government is betting on the reversal of exemptions and on extraordinary measures to collect more, with a total impact estimated at BRL243 billion, resulting in a theoretical fiscal surplus. The measures do not replace the presentation of a new fiscal framework, to succeed the spending cap, which should be defined by April.